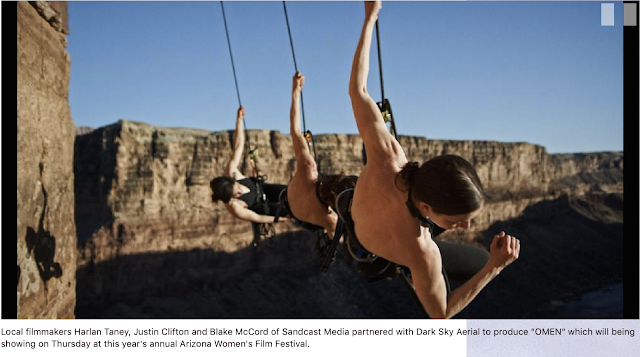 This Thursday, the Orpheum Theater is hosting the 6th Annual Arizona Women’s Film Festival for the community of Flagstaff as a way of celebrating and elevating stories about women and the gender non-conforming, non-binary, genderqueer and transgender communities.

The work of these filmmakers is so important because it offers audiences a lens that recognizes the intersectionality and interconnectedness of the human experience and the natural world around us. Some of the films that are showing at the festival this year are “Revelucien” about a drag performance artist and painter who took their performances to the street during the COVID lockdowns, “Voices of the Grand Canyon” which studies the connection that five different Indigenous tribes have to the Grand Canyon and the experimental dance film “OMEN” which, earlier this year, was written up in the New York Times after it showed at the Lincoln Center

It’s a special film that foregrounds the mission of the Arizona Women’s Film Festival with elegance and strength and is, in many ways, the perfect story for an event like this.

In his write-up in the New York Times, author Brian Seibert stated that the cinematic product of “OMEN”, “transcends the mundane through its setting: the Grand Canyon,” and that, “the grandeur calls for a theater-sized screen.”

Myra Popejoy and Abby Chan, two of the stars in “OMEN”, expressed how humbling this experience has been for them, but they both acknowledge the challenging yet rewarding path that led their team to where they are now.

They began brainstorming ideas for this new project in the Spring of 2021, and despite the steady rollout of vaccines, a live performance was not an option. As a result, Dark Sky Aerial decided to break from tradition and commit their next piece of performance art to film.

With a piece as gracefully intricate as “OMEN”, one expects to hear that every single step was planned out, from the choreography to the camera movements, when in reality, this creation was, for the most part, improvised.

“We had multiple in person rehearsals where we worked on what we call ground movement, which is just like dancing on the ground,” Chan explained, “and then looked at what story lines and movement threads we wanted to create and hopefully put them on this 800-900 ft wall.”

In the end, the team only had a day and a half to shoot, but through this unorthodox method of communal improvisation, the dancers were able to create something wholly unique and impossible to replicate.

This novelty is, in many ways, why it’s become so successful. The stark contrast between the towering cliffs of the Grand Canyon and the dancers “bouncing,” as Seibert wrote, “off its surface like astronauts on the moon,” is a potent antidote to the banality that inevitably seeps into everyday life, but it’s their graceful handling of the film’s themes that make “OMEN” what it is.

“The story is intended to be not just about perseverance through COVID,” Popejoy said, “but about looking at our lives individually and realizing that every person goes through really difficult things in life, and the concept of not being alone in that and being able to look at the things that are thrown our way that may be terrible and that we have to find a way to process and find a community that can help support that process.”

In the film, the performers sidestep along the face of the cliff, inextricable from the shadows at their feet. This dark companion is connected to each and every one of them as they leap away and fall back. Near the end, the main character, played by Popejoy, is hoisted up and away from the wall by her fellow dancers, creating an indelible image of the power of community and perseverance.

At the moment, the team at Dark Sky Aerial remains unsure of what the future holds, but for now, they’re taking the time to be grateful.

Popejoy said, “It just feels so great to be a part of it, and I think for us, the creation of it was this incredible experience. I think all of us missed that, and we craved that feeling of being on the wall, being together and creating it.”

“It’s really beautiful to be able to share this again on the national and international level,” Chan continued, “and really to see how it speaks to people of all walks of life and people of all ages and hear the experiences that they have had after watching the film… it’s beautiful knowing that art speaks. It doesn’t have boundaries and it doesn’t have a language.”

If you would like to learn more about “OMEN” and Dark Sky Aerial, visit their website at www.darkskyaerial.com, but if you would like to see the film, head to the 6th Annual Arizona Women’s Film Festival for a night filled with drama, beauty and companionship.

Cost: $10 GA | $8 Student (a portion of all sales will go to Victim Witness Services for Northern Arizona.)