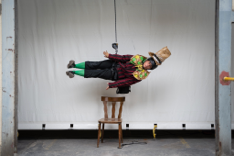 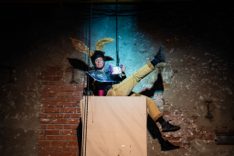 You
You
You
and
i in wonderland
The totally crazy vertical dance production created with and performed by people aged six to 51 is back
That's impossible?
Only if you don't believe in it
(from Alice in Wonderland)
"i in wonderland" is a vertical dance production created with and performed by 29 kids age 6 to 16 and 9 artists that drives the logic of the real world crazy. It consists of a live experience and the possibility to digitally broadcast the play afterwards.
"i in Wonderland" makes the seemingly impossible possible. The rules of space and time dimensions are suspended and reinterpreted. There is no fixed stage, everything can and will become part of the piece. The audience moves through the space together with the vertical dancers and relives scenes from Alice in Wonderland. Up becomes down, walls become the floor...
Take your chance and get your ticket - because in wonderland there is only a limited number of places available.
You can reserve your ticket online at:
tickets@angels-aerials.de
Prices: Pay what you think it´s worth
Premiere: 17th of June at 6 p.m.
Further dates:
18th of June at 6 p.m.
19th of June at 11:00 a.m. and 3:00 p.m.
22th of June at 6 p.m.
23rd of June at 6 p.m.
The venue
Flight hangar of the Hafenakademie Cologne Mülheim
Deutz-Mülheimer-Str. 183
51063 Cologne - Germany
"i in wonderland" is supported by: