The Irish World Academy of Music and Dance, University of Limerick, presents a special virtual performance of music, song, and dance.

In partnership with
The University of Limerick 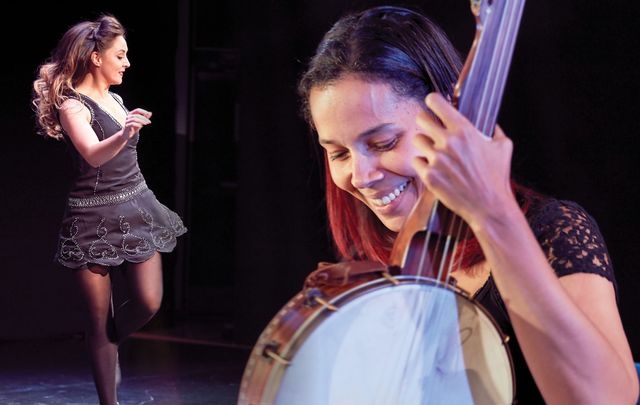 The Irish World Academy of Music and Dance, University of Limerick, presents a special virtual performance of music, song, and dance, performed at University Concert Hall, for St Patrick’s Day. This unique concert will see performers from all over the world coming together, including very special guests, including Grammy award-winner Rhiannon Giddens.

Rhiannon Giddens is an extraordinary American musician, who is now a doyenne of the international folk scene. With the ground-breaking ensemble, Carolina Chocolate Drops, she forged the award-winning path that she has continued to walk since the group won a Grammy Award for “Best Traditional Folk Album” of the year in 2011. They were nominated in the same category again in 2013 and Giddens was nominated in a solo capacity in 2016 with her solo debut “Tomorrow is My Turn”, produced by T Bone Burnett, which won “Best Album of the Year” at the International Folk Music Awards and, in the same year, earned her the accolade of the BBC 2 Folk Singer of the Year.

She was the first American to win the BBC prize. Her latest album “There Is No Other”, with Francesco Turrisi, was also nominated for a Grammy, and she has recently become the new Artistic Director of the Silk Road Ensemble.

Fidget Feet Aerial Dance Company was founded by choreographer and aerial dancer Chantal McCormick from Donegal and musician and media artist Jym Daly from Cork, with the passion to tell stories through aerial arts that moves people and changes lives. As the first aerial dance company in Ireland, Fidget Feet are the leading creators, performers, and trainers of aerial dance in Ireland.

Since 1998, Fidget Feet have created over 30 shows and performed across five continents to audiences of hundreds of thousands of people. They tour indoor and outdoor venues nationally and internationally, create crane and vertical dance performances on iconic Irish landmarks and shows for young audiences.

They are involved in community development regionally, as well as professional development through establishing Ireland’s first aerial dance festival and training center.

Celebrating all the creativity, talent, and passion that the Irish World Academy has to offer, these world-renowned musicians, singers, and dancers come together on the University Concert Hall stage, to create a performance full of joy, passion, and festivity to celebrate a St. Patrick’s Day like no other!

This special event is a partnership between UL Global, Irish World Academy of Music and Dance, University Concert Hall and Limerick Culture and Arts Office, Limerick City and County Council

This free concert will be available to view from 7pm PST / 7pm CST / 8pm EST on the 17th of March 2021 and you will be able to get more information and a link to the concert on the Irish World Academy website& social media platforms of all partners. 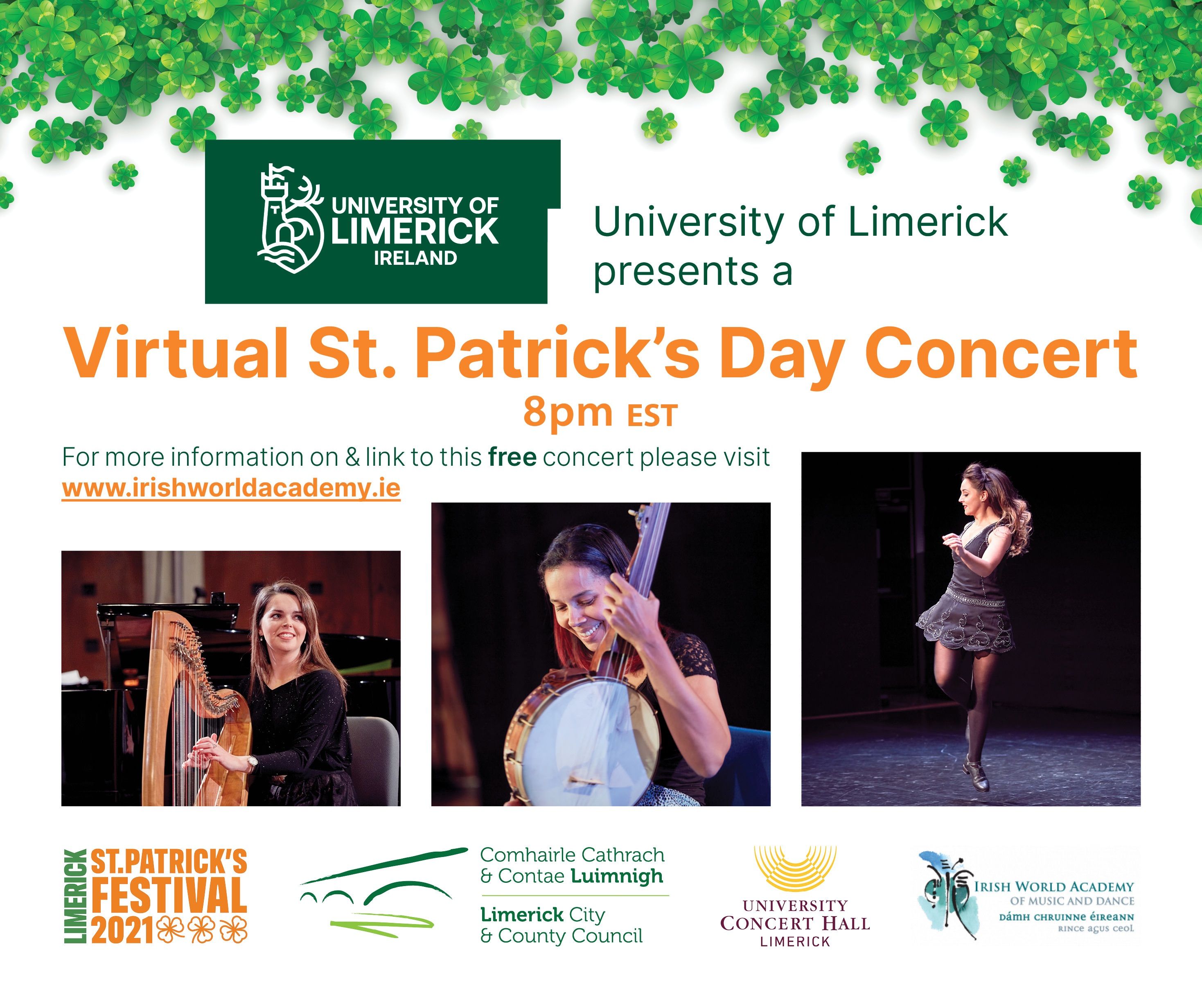 The St. Patrick’s Day Virtual concert will also be launched in multiple time zones on March 17th as part of a UL Global initiative to connect with potential students, alumni, and the wider diaspora in order to showcase all that the University of Limerick has to offer international students.

Speaking about the St. Patrick’s Day Virtual concert Josephine Page, UL Global Director, said “UL Global is delighted to collaborate with the University of Limerick's Irish World Academy of Music and Dance (IWAMD) to bring you a flavor of Ireland's rich musical heritage during our national day celebrations.

"The academy welcomes students from all over the globe to undergraduate and graduate programs in Music, Dance, and Voice.  I hope that this special performance brings the warm Irish spirit to you wherever you are in the world, and on behalf of the UL Global team, I wish you a happy St Patrick's Day.”

The Irish World Academy of Music and Dance

The Irish World Academy of Music and Dance is the center of academic and performance excellence housed at the University of Limerick, Ireland. It offers a suite of taught undergraduate and postgraduate programs in music and dance-related subject areas. Its research is at the forefront of these fields of enquiry worldwide. With a 5000 square meter, €21 million performing arts building hosting some 300 students at any one time from c.25 different countries, the Academy is a vibrant center of arts practice and academic study. To date, graduates of the Irish World Academy have come from over 50 different countries.