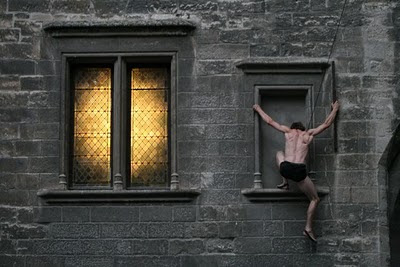 Antoine Le Ménestrel is one of the creators of what is known as “vertical dancing”. Well-known for his feats in the mountaineering world, in 1988 he embarked on another career that would enable him the express his unique personality. Thus his vertical dancing moved from rocky cliffs to town centres in blend of contemporary dance, street art and climbing, interpreted in a new, poetic vision. The film immortalises Le Ménestrel on the legs of his 2007-2009 tour in Italy and France. This travelling show is a fascinating insight into a both the artist and the man, his poetic universe and his vision of reality.
Pubblicato da International Vertical Dance Network a 09:59

International Vertical Dance Network
Venice, Italy
Since 1994, we are a vertical dance company! We created many performances site specific, working with live music and video. We like to involve different artists, to combine height and contemporary dance! We are the founders Wanda Moretti, coreographer, Marco Castelli, musician. See our website to know more about us! www.ilposto.org